Pneumania formally known as ‘Snow White and the sic Punks’, were formed early in 1979 in Luton UK by founding members and nihilists, Steve Spon and The Captain (not Sensible!). They had just converted a basement in a soon to be demolished terraced house in Luton, into a rehearsal room and went on a hunt for a Vocalist and Bass player. 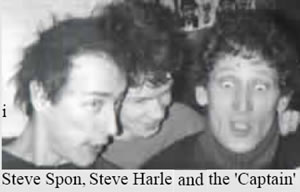 Their search led them to the ‘Grapevine’ public house that was the ‘hub’ of the thriving Luton Punk scene. Amongst the throng of ‘spikey-tops’ and ‘Seditionary’ clothed regulars, one girl stood out from the crowd. Her name turned out to be Gaynor and although she had never sung before, she gladly accepted an offer to come along to a jam session in view of forming a Band.

Gaynor had spent the last year or so, charging tourists along Kings Road in Chelsea for taking her picture. With her bleached white ‘Jack Frost’ haircut and stunning punk fashion clothing she wouldn’t fail to catch the eye, but the ‘real deal’ about Gaynor was in spirit she was a seminal punk Goddess. It wouldn’t matter if in a musical sense whether she could sing or not, what she had to say would be more important.

Initially, the Captain who formally played guitars and at the time was currently playing Bass with Luton’s first punk band  ‘The Jets’, would now focus on drums.
Spon who formally played keyboards, would take up the guitar. For the first few sessions this was the line-up and although much ragged round the edges, within a short while a new sound developed with a hand full of songs becoming established.

Recruiting the right Bass Player however, was proving a problem. Cue Steve the Voice, who had been on the sidelines for a little while. An ex-art student with his ‘nose on the streets’ who couldn’t play a note wanted to give it a go. With initial reservations he was given a chance to prove himself on bass, which after a while he did! For the early part of 1979 the new band thrashed away in the basement and gathered together a set of tunes.

A name for the band was chosen, ‘Snow White and the sic Punks’ and before long the first live gig was on the horizon. This provided a dilemma for ‘The Captain’ as the ‘Jets’ whom he also played bass for, were booked  on the same bill! This thought the Captain, wouldn’t go down very well with the guys in the Jets. To get round this the Captain played the first ‘Snow White and the sic Punks’ gig completely swathed in ‘Mummy’ style bandages, so as not to be noticed by the Jets or so he thought!. Half way through the gig the bandages inevitably started to come adrift eventually leading to severe embarrassment on the Captains behalf. This led to an altercation the following weekend whereby Captain was indignantly thrown down the stairs to the washrooms at the Grapevine by the guys in the Jets. After this, the Captain decided to move into management, vacating the Drum kit.

The first gig at Luton’s Barnfield College was historical in the sense that this was the location where the Idea of ‘The Split Single’ was first conjured up,  alongside fellow Luton punk band ‘The Resistors’ (UK Decay) who were on the same bill. Putting aside ‘Captains’ embarrassment, it turned out to be a really ‘stunning’ gig. However, ‘Snow White and the sic Punks’ were now in need of a drummer. 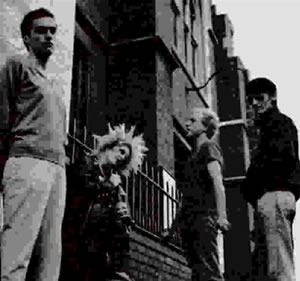 Cue Nigel Dark, a friend of Steve the Voices, Nigel was an accomplished drummer with a grounding in Jazz as well as ‘Nihilism’. Within a few rehearsal sessions Nigel had fully integrated himself into the sound and it was at this point that ‘Snow White and the sic Punks’ would now change their name to ‘Pneumania’… TBC..

The ‘Welly Street’ abode complete with rehearsal room and outside bathroom – minus roof, during the early part of 1979 quickly became established as the HQ for Pnuemania and The Resistors -who later changed their name to UK Decay. The formal tenancy of the house was at an end and the demolishing contractors were pulling the houses down around to make way for a new development. This sense of uncertainty galvanised much support from the punk community whom rallied round to help. 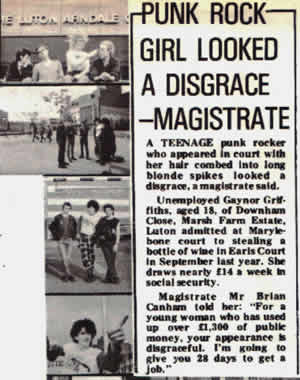 The Captain and Spon who were then residing there, decided on a strategy to hang on to the home and base for as long as possible. One day the contractors started demolishing the house next door, the response by the punk residents was to fetch the amplification equipment up from the basement and to set it up in the street outside – then to blast the neighbourhood with loud punk music, in the middle of the working day -in Luton town centre.

Meanwhile Captain got onto to phone to the local press who were based just a few streets away, they could hear the noise from their offices. Very soon, the local press, police and a huge crowd had gathered to see what the fuss was about. Very quickly the demolition work halted and a stay of execution for a couple months was granted for consideration. This created much interest locally and provided motive and a strong sense of mission to achieve as much as possible in the time remaining at ‘Welly Street’.

Around that time a ‘locally -famous’ piece of Luton graffiti appeared – ‘C-O-U-N-C-I-L – V-A-N-D-A-L-S’ – each letter man-sized and painted with a roller-brush of white paint, running along a street full of front doors – each house sadly empty and awaiting demolition. This proved a great spin for the press to use as a certain Mike ‘English’ , made sure he had this as backdrop when the local press took his photo.

It was spring 1979 that the idea of the two bands collaborating came to root amidst this background. Thatcher was now in power, things looked grim all round. An idea was taking shape, the two bands pooled their resources and a new record label – ‘Plastic Records’, was created.

A release date had been set for two months and Pneumania set about writing and perfecting the two songs they had committed for the recording session. Captain now took on a ‘Manager’ role as new drummer Nigel ‘Dark’, who stood tall, aloof and looking every bit a character out of a Hammer movie – took his seat. His style was much more flippant and progressive, compared with the standard ‘2 – 4”s of the usual punk drumming. Grounded on the ‘arty’ and ‘jazz’ side, Nigel’s involvement showed great promise for future progression. He had a highly distinctive and original style. However the nickname ‘Dark’ wasn’t just his punk pseudonym – it was how he was. He would keep everyone guessing as to whether or not he would actually turn up for a rehearsal or even a gig! 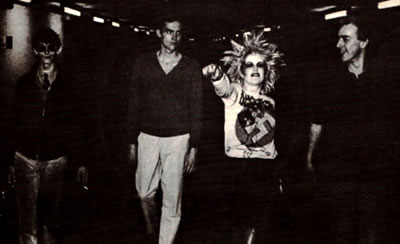 Within the ‘Split Single’ development period, the two bands collaborated on a number of self-promoted gigs. They also self-penned their own networking tool – a fanzine called ‘The Suss’ which was released to coincide with these events.
The homogenisation of not just the two bands but by now a thriving community, was working very well. These were very creative times and the whole ‘Plastic Records’ gathering was gaining momentum. The recording studio was booked and the day had arrived.

Pneumania recorded two songs; ‘Exhibition’ and ‘Coming Attack’ that day, it turns out to date the only songs the band ever released. ‘Exhibition’ is the liturgy of a pure raw strangled, angry punk goddess – lamenting the attitudes the rest of society has towards her and her ilk. Her performance on the record was full on with her insides hanging out for all to see. Her ‘naked and beleaguered punkette soul’ – looking into the mirror. The music was raw and cutting with juxtaposed ‘dubby bass’ and ‘staggered drums’. The guitars phaser-slicing – jagged chords from Spon’s five strings. It builds, there’s tension, followed by a finale. “It’s a freakshow – nothing new”. Superficially it was wide open to criticism, but on another level it was a really potent performance by all in the band. 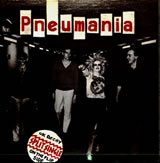 ‘Coming Attack’ – the terror at the heart of urban nightmares- is a poem written from the narrative of the deceas-ed’s perspective. The loneliness of the victim succumbing to the inevitable fate in a street attack. Being a ‘Punk’ didn’t necessary mean being any different to anyone else in society. We are all vulnerable and made of flesh and blood. Actually being a punk back in the day, did increase the risk of ‘inviting’ attack.(Sadly, there are still isolated cases today – visa Sophie Lancaster)

This actually happened back in the day, to three of the band whilst returning to the rehearsal room one night. They were ‘jumped’ by a stick wielding thug who nearly broke Spon’s arm.

The music is a very fast paced three-time rhythm with a running bass line, the sheering 5 string guitar plays a single rhythmic chord. It builds, peaks rebuilds and finally crescendos as the knife strikes home. It’s all over in little over a minute – but wow! what a unique idea and production.

The afternoon in the studio had been reasonably successful, the band were happy, now it was time to get the recording released. All systems go on the ‘Slit Single’ project – five weeks to go before the deadline…….